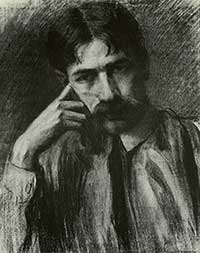 Aaron Harry Gorson was born on 2 June 1872 in Kovno, Lithuania.

In 1888, when he was just 16, he emigrated from Lithuania and travelled to Philadelphia, USA.

Later, in 1900, Gorson studied at the the École des Beaux-Arts, the Académie Julian and Académie Colarossi.

Gorson exhibited paintings at the Pennsylvania Academy of Fine Arts in 1902.

The reproduction of a stolen piece of art, provided by Artunframed, far exceeded our expectations !

Artists : Join our team and receive 90% of the commission fee Click here for more information

Commission a portrait or reproduction, entirely hand painted in oils on canvas.